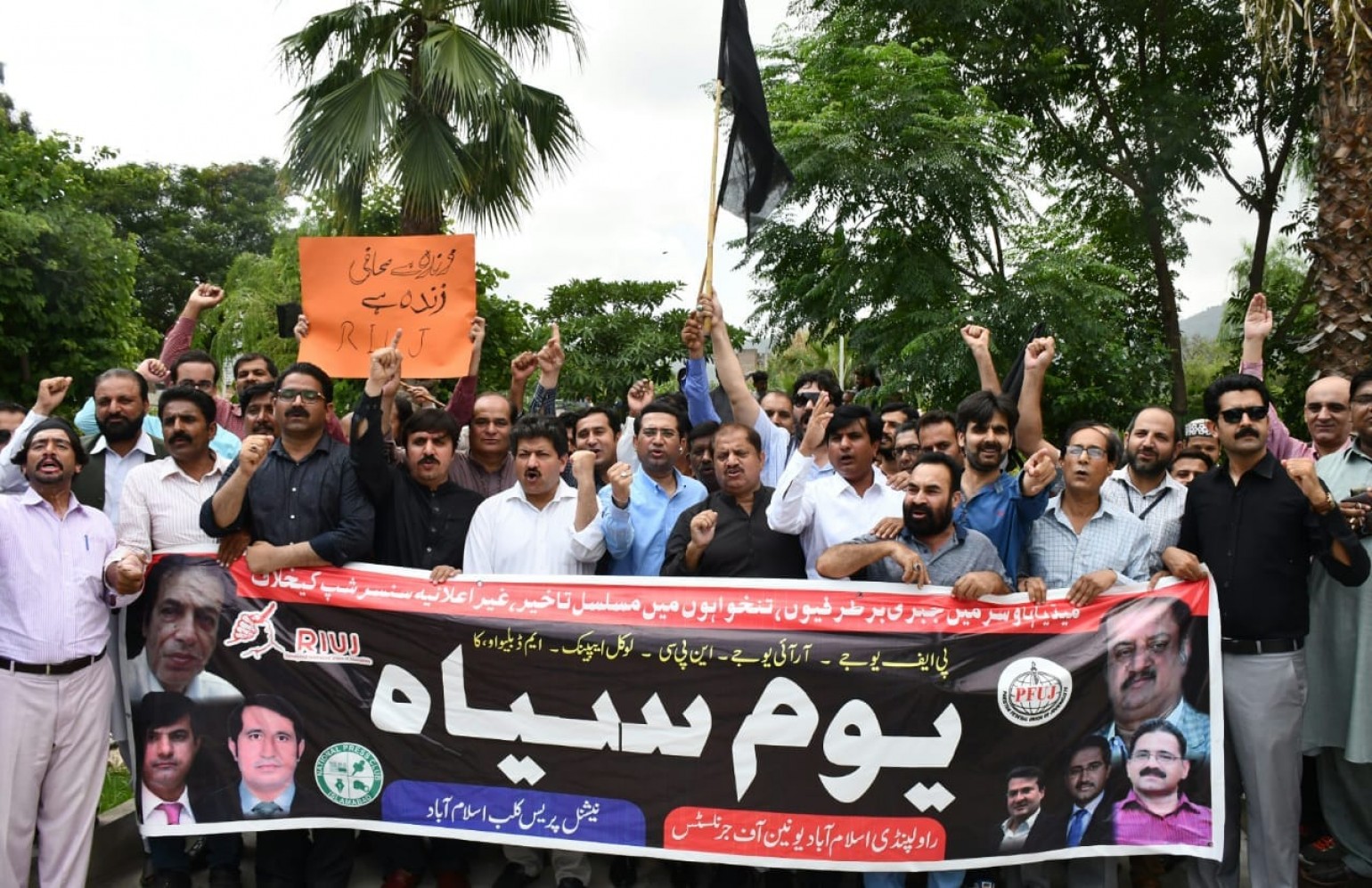 Media workers, press clubs, and trade unions of journalists across Pakistan observed a “Black Day” on Tuesday to protest against mass layoffs of journalists, wage delays, and the unannounced censorship of the news media.

The move was led by the Pakistan Federal Union of Journalists (PFUJ), which issued the call for a protest last week in collaboration with the All Pakistan Newspaper Employees Confederation (APNEC).

Solidarity rallies, gatherings, and demonstrations were organized at press clubs in Islamabad, Rawalpindi, Karachi, Lahore, Peshawar, Quetta, Gujranwala, Hyderabad and Sukkur among other cities. Journalists wore black armbands and shouted slogans to denounce censorship. Black flags were waved at the press clubs during the day.

The protest demonstrations came a week after three news channels were abruptly taken off air for a live broadcast of an opposition political party’s press conference and two other TV networks appeared to have been pressurized into suspending telecasts of interviews with opposition leaders.

Tuesday’s nationwide mobilization was also intended to raise voice about the financial pressures and employment issues for media workers in the country at present.

Representatives of journalists’ unions have said thousands of media workers have been terminated from their jobs with little or no notice during the past year. They accuse the federal government of triggering a financial crisis in the news industry when it temporarily suspended official advertisements to media organizations in 2018 and claim it is part of a larger attempt to muzzle press freedom. Since May, the government has continued an arbitrary ban on its advertisements for Dawn, the country’s leading and most fiercely independent daily newspaper.

PFUJ President Afzal Butt said the Black Day rallies were the beginning of a movement, according to Dawn. “Around 5,000 journalists have lost their jobs over the past eight months and we believe it is a part of the censorship,” Butt was quoted as saying.

The protest gathering organized by the PFUJ and Rawalpindi-Islamabad Union of Journalists outside the National Press Club in Islamabad was addressed by Butt along with senior journalists Nasir Zaidi, Hamid Mir, and others.

Journalist Asma Shirazi, who has been a target of coordinated and malicious online hate campaigns to discredit her work, said journalists will not stop speaking and writing the truth.

“This is a promise you and I, all of us journalists, have made,” she said, at the National Press Club gathering.

While journalists protested in various cities, two Twitter hashtags that trended in Pakistan on Tuesday left little doubt about ongoing attempts to intimidate, and harass journalists and news media outlets.

The first trending hashtag #LayOffLifafaJournalists directly questioned the Black Day protest call by journalist unions, maligned independent and critical journalists through manipulated images and photos, and accused media workers of being anti-state. The hashtag was trended by a group of users who identify themselves as team members and admins of the twitter account @TeamPakZindabad (#TeamPakZindabad). The main account, which was created in April, and its admins appear to regularly coordinate their activity to trend hashtags, most of which deal with national security.

The second hashtag #JournalismNotAgenda saw direct involvement by official Twitter accounts of the ruling Pakistan Tehreek-e Insaf (PTI). Tweets posted using this hashtag appeared to be veiled threats reminding media organizations and journalists to not “end up propagating (the) enemy’s stance”. The PTI accounts did not specify exactly who the party believes is the enemy.

Earlier in July, a hashtag calling for the arrest of anti-Pakistan journalists had similarly trended on Twitter after hundreds of accounts involved in bot-like activity amplified messages that hurled accusations and incited hate against specific journalists.

🗞️Stay informed on the latest digital rights and internet governance developments with our weekly news review.

This is how we coped with mega power failure at Media Matters for Democracy. How did you manage- do share with us below. 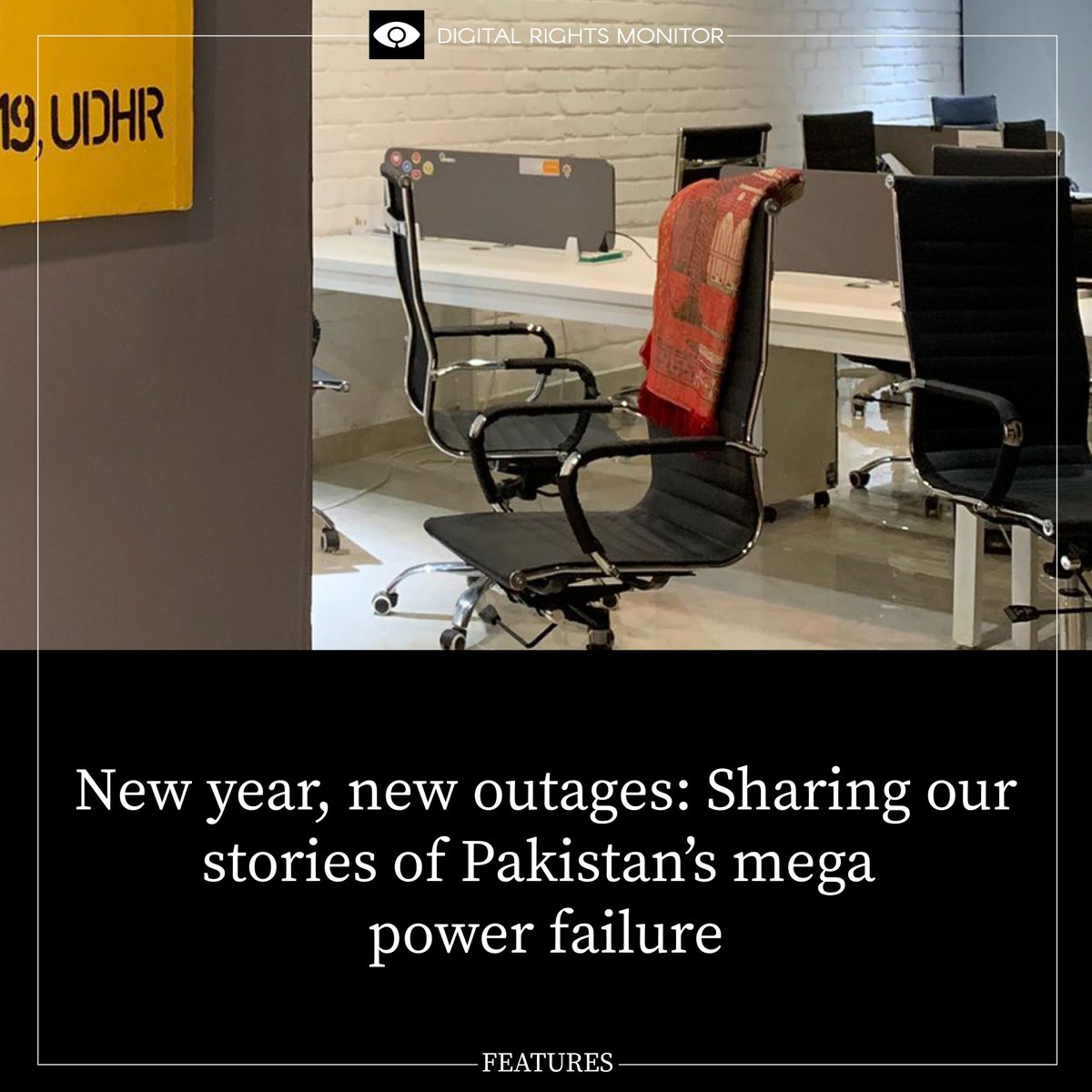 Here’s how our team at Media Matters for Democracy (@mmfd_Pak) coped with the connectivity disruptions and blackout of epic proportions that had the country gripped throughout Monday.