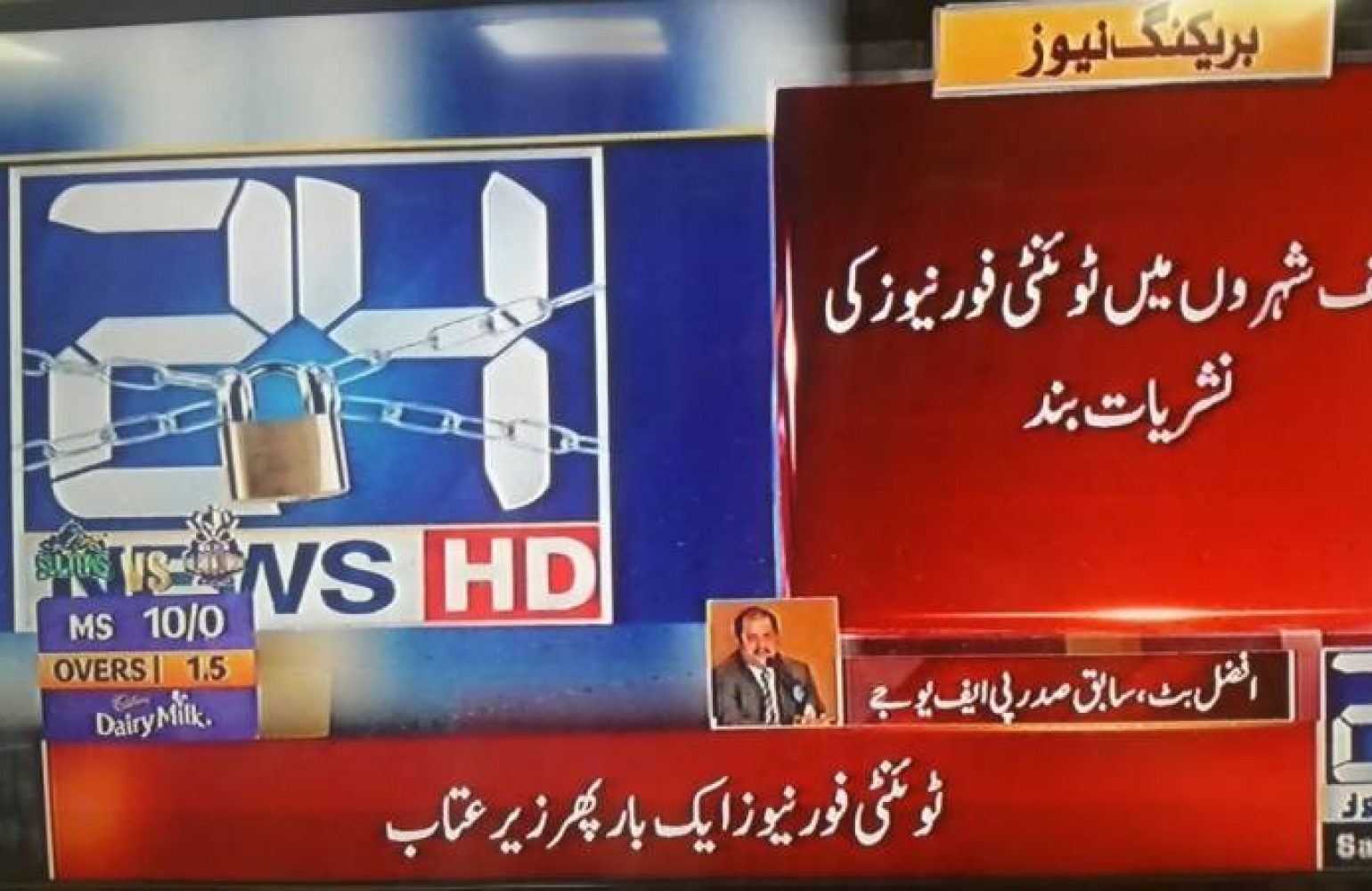 Media Matters for Democracy (MMFD) strongly condemns the decision by the Pakistan Electronic Media Authority (PEMRA) to suspend the broadcast license of 24 News — one of the country’s leading television news channels —, and the order to immediately halt the channel’s broadcast in less than a month. The decision will not only force the news channel to shut down but, according to unconfirmed reports, could also render as many as 700 journalists jobless.

The notice by PEMRA directing the management of ’24 News’ to halt the broadcast was issued on 3rd July. Since then, there is uncertainty over the future of the news channel and its employees. According to PEMRA’s press release, the management of 24 News was informed on 7th May that their news and current affairs programming was not in line with the entertainment license the channel was operating under. The press release also stated that the license was issued to Central Media Network (PVT) Ltd. to broadcast entertainment programmes on “Value TV Channel”, terming the change of name to 24 News illegal.

The television channel was founded in 2015 and has been airing national news content since, after the popularity of its sister local channels — City42 and City41 — that air local political news in Lahore and other cities. It also rebranded itself as 24 News HD, after providing viewers with high definition picture quality.

This is not the first time that PEMRA has had a confrontation with 24 News. In June 2019, the regulatory authority issued a notice to veteran analyst and journalist, Najam Sethi, for comments he made about the Prime Minister in an episode of his 24 News talk show. The show was taken off the air at the same time. It was unclear why, but news reports suggested that it was due to growing pressure from the government over Sethi’s political views and political criticism. The show returned to the airwaves this year in February, after a seven-month hiatus.

The current move by PEMRA to suspend the 24 News license is being seen by many journalists bodies and political parties as an attack on press freedom, and a move to effectively silence voices that are critical of the current government. The license suspension was fiercely criticised by the Pakistan Federal Union of Journalists (PFUJ), Association of Electronic Media Editors and News Directors (AEMEND), National Press Club Islamabad (NPC), and the Karachi Press Club, among other journalist bodies.

There are also questions being raised about the timing of this action. The news channel has continued to operate for the past five years without any interruptions, or questions regarding the appropriate licensing, especially due to its critical stance on government policies.

PEMRA’s decision has been termed by Pakistan Federal Union of Journalists a ‘politically motivated action’ and thus also raises important questions about the Authority itself and how it functions.

Another television news channel, Neo TV, had faced a similar suspension in the recent past, where PEMRA had ordered to halt the channel’s broadcast — i.e. due to the ‘illegal transmission of news and current affairs over a license to broadcast entertainment content’ — and declined Neo TV’s request to change the license type citing ‘2012 Regulations’ which bars it.

However, it is important to note here that the validity of ‘2012 Regulations’ under which the PEMRA has issued such notices does not have legislative or federal approval, and in the past, the courts have raised questions about it. Due to this reason, Neo TV’s (suspended) license was restored by the apex court earlier this year, and the channel’s management was told by the court to challenge the ‘2012 Regulations’, which bars television channels from changing their license type.

Therefore, we strongly urge PEMRA to: