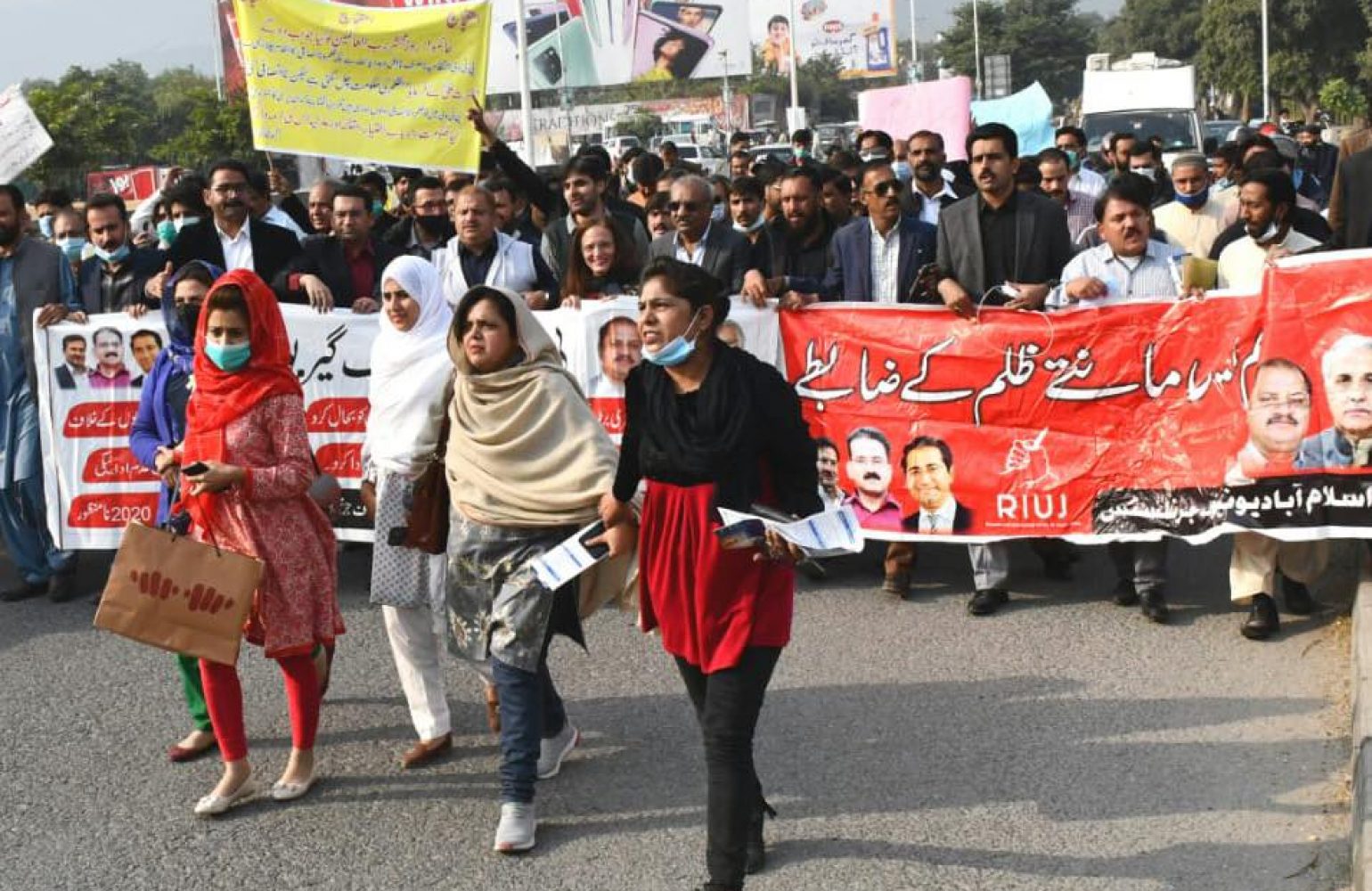 Media Matters for Democracy (MMFD) endorses the demands of Pakistan Federal Union of Journalists (PFUJ) — to ensure media freedoms and abolishing censorship — set forth in the recent nationwide demonstrations staged by the Union through its local chapters across the country.

We call upon the federal and provincial governments to ensure media freedoms in the country.

The Pakistan Federal Union of Journalists (PFUJ), as a follow up of the decisions made in its Federal Executive Council (FEC) held in Quetta in September 2020, staged another round of nationwide demonstrations against increasing censorship, non-payment of salaries, and ‘structured downsizing’ of the journalism media.

Protests were held in Islamabad, Lahore, Karachi, Quetta, Peshawar, Hyderabad, Sukhhur, Gujranwala, and Faisalabad, according to the former president of the PFUJ, Afzal Butt.

“The declaration issued by the PFUJ’s FEC in Quetta earlier this year demands that the government abandons all of it’s anti-media policies and sit down with the representatives of the media industry and civil organisations including the Human Rights Commission of Pakistan to reach an accord that would guarantee media freedoms”, Afzal Butt, the former President of PFUJ, told MMFD.

“Not only that these demands were not met, but we see more and more censorship and layoffs in the media houses. Recently 700 employees were let go from the Radio Pakistan and that too during the pandemic. This state of media in Pakistan is not acceptable, and thus the PFUJ has, in line with its decision at the Quetta FEC, decided to stage nationwide demonstrations”, Butt said.

“A systematic war has been launched by the government and anti-democratic forces to curb the freedom of expression and force the media houses to toe the official line or face the government’s wrath”, reads the joint FEC declaration issued after the September 2020 FEC meeting in Quetta.

The PFUJ’s FEC meeting was attended by FEC members and the presidents and secretaries of the local chapters of journalists unions from across the country, and was chaired by the PFUJ President Shahzada Zulfiqar.

As a part of the nationwide protests, the PFUJ along with its local chapter the Rawalpindi Islamabad Union of Journalists (RIUJ) staged a demonstration in front of the Parliament house this week. A number of local and national representatives and members of the journalists union addressed the gathering and denounced the increasing censorship, non-payment of wages, and structural downsizing of the news media.

Nasir Zaidi, the General Secretary of the PFUJ, addressing the demonstration said, “we will do what it takes to get our rights, and will not stop until we do”.

Afzal Butt, the former President of PFUJ, raised the question on the blocking of 24 News — a news channel banned by PEMRA for more than 70 days due to violation of the regulator’s code of conduct — and said that it should be immediately restored.

Mubarak Zeb, the former President of RIUJ endorsing Butt’s view said, “we are dealing with a double edged sword. Increasing censorship on one side, and the [media owners] broadcasters on the other who are making deals with the government and firing our colleagues. Both are condemnable”.

Journalist Munize Jahangir also addressed the protest and stressed upon the need for a unified stand for media freedoms. “We have enough power among ourselves to get our voices heard.”

Senior journalist Fauzia Shaheen addressing the protest said that the PFUJ will not back off from its decades long struggle for press freedom and we will continue to fight the perpetrators of crimes against media and journalists.

Speaking to MMFD later, Hamid Mir, who is also an active member and supporter of the PFUJ, said, “Enough is enough. It is about time that we start pushing back on those who threaten journalists and media, and we will do just that if our demands [with regards to media freedoms] are not met. If the trend [of media oppression] continues, we will start naming and shaming the perpetrators of crimes against journalists”.