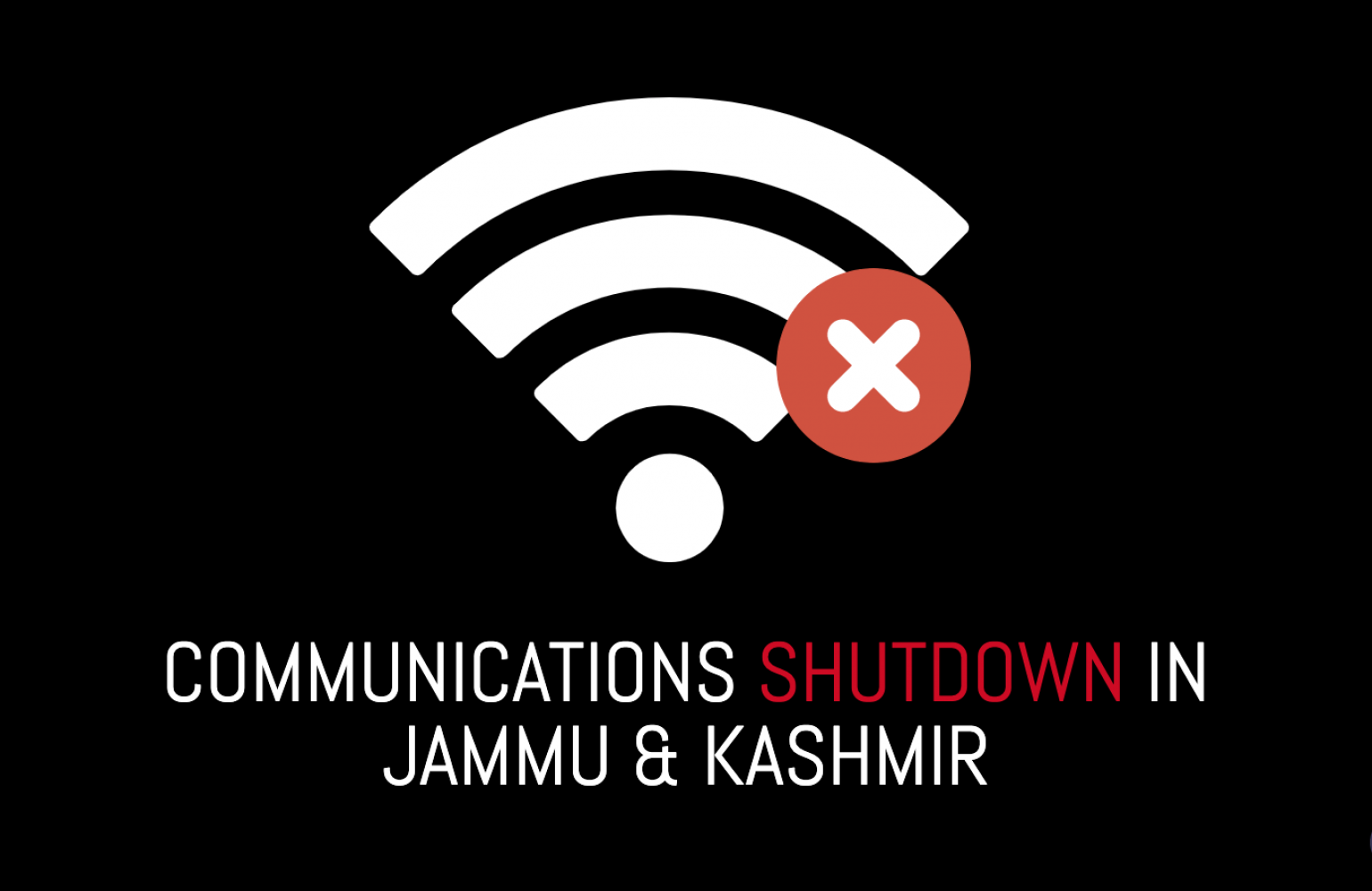 The Association for Progressive Communications condemns the prolonged and intentional disruption of communications services in Jammu and Kashmir by the government of India. It is particularly critical that stable communications infrastructure and services are maintained during times of conflict and key democratic moments such as when significant changes are made to the status of a region and the rights of the people living there. Communications blackouts often enable other violations of human rights, which can take place under cover of darkness with impunity, and considering the history of widespread abuse of human rights in Kashmir, this is particularly worrying.

The United Nations Human Rights Council, with India as a member in 2016, unequivocally condemned internet shutdowns – measures to intentionally prevent or disrupt access to or dissemination of information online in violation of international human rights law – and called upon all states to refrain from and cease such measures. The UN Special Rapporteur on Freedom of Opinion and Expression David Kaye characterised a previous internet and telecommunication ban in Kashmir as “collective punishment,” failing “to meet the standards required under international human rights law to limit freedom of expression.” In recent times, governments frequently impose shutdowns during demonstrations, elections and other events of extraordinary public interest with little or no explanation even though this is clearly against international norms and national law guaranteeing the basic human rights for freedom of speech and assembly in a democracy.

In spite of this, on 5 August 2019, the Indian state imposed a severe communications blackout in the region of Kashmir that included all digital and non-digital modes of communication, internet via broadband and mobile communications, and also phone or landlines, along with a curfew that imposed severe restrictions on mobility within the region. This lockdown and shutdown was put into effect after days of build-up, when non-Kashmiris were asked to leave Kashmir and army troops were flown into Kashmir, which is already the most militarised zone in the region. The government is also continuing the blockade on free speech by asking social media companies to block independent accounts from Kashmir. In a six-monthly review by civil society organisations based in the region, there had already been an estimated 51 internet shutdowns in 2019 by July. As per the report, “The first six months of 2019 recorded 271 killings in IAJK [Indian administered Jammu and Kashmir] in various incidents of violence, which include 43 civilians, 120 militants and 108 Indian armed forces personnel.”

Background to the events

On the first day of the monsoon session of the parliament, a barrage of laws were introduced titled The Constitution (Application To Jammu And Kashmir) Order, 2019 C.O. 272 along with a declaration under Article 370(3) Of The Constitution C.O. 273 that totally dilute and then remove the special status of Jammu and Kashmir as granted under the Indian constitution. Article 370 of the Constitution adopted in 1948, by agreement between India, Pakistan and the United Nations, recognised that the accession of Kashmir to the Indian state was under specific conditions of autonomy, separate internal administration and their own flag. The constitutional provision also provided that this special status could only be changed by agreement with the constituent assembly that is elected by the people. Until these recent amendments, the parliament of the Indian Union only had powers in the region in relation to defense, external affairs, and communications.

The current Bharatiya Janata Party-led government, however, bypassed what is laid down in the Indian constitution and through illegal and arbitrary amendments declared that the special status no longer applies and also divided the state into two parts: Jammu and Kashmir, and Ladakh (with Ladakh to be a union territory without a legislative assembly). These amendments completely undermine the rule of law in the country and alter the status of not just Kashmiri citizens, but all Indian citizens, as well as their faith in the Indian constitution and the legal democratic process.

The Office of the Human Rights Commissioner of the United Nations released a report in July 2019, that raises serious concerns about abuses by state security forces and armed groups in both Indian and Pakistan-held parts of Kashmir. Over the last several decades there have been torture and killings in Kashmir (2017 saw a record high of civilian killings out of the 318 killed), disappearances of 10,000 Kashmiris (particularly young men), along with sexual violence and molestation of Kashmiri women. Crowd control during protests has led to the use of the infamous pellet guns that have blinded several people, including young children and even a 20-month-old baby. The same report noted frequent internet shutdowns and other restrictions on freedom of expression in Kashmir and called on the Indian authorities to investigate all blanket bans or restrictions on access to the internet and mobile telephone networks that were imposed in 2016 and ensure that such restrictions are not imposed in the future.

At this moment the Bharatiya Janata Party-led government has, by removing the special status, undermined the universal right to self-determination of the Kashmiri people. The total communications blackout ensures that there is limited and incomplete information coming from the people in the region who are being denied their rights to express themselves freely, to assemble and to protest against the arbitrary changes in the law and their status by the Indian government.

The severe constraints on communications are also impacting reporting from the region, which is not sufficient and is limited to certain parts of Kashmir, largely Srinagar. There are also contradictory versions of peace and quiet in the valley on one hand, while several respected media outlets such as the BBC and Al Jazeera have carried videos and reports of violence, including teargas-firing and pellet-firing on protesters. Over 300 people have been detained. The curfew and mobile, phone and landlines blackout reportedly remained in place during the Eid holiday. The deployment of an additional 25,000 troops in the region in July 2019 also indicates that the resistance of the Kashmiris was anticipated and is being tightly controlled.

Detention of human rights defenders, political actors, and the media

Several leaders were placed under house arrest or detained between 3 and 6 August, including members of the People’s Democratic Party and National Conference, as the law was introduced in the parliament in Delhi. Further, it is reported that activists in other parts of the country, including Magsaysay Award winner and social activist Sandeep Pandey, have been placed in detention to quell dissent. This severely curtails the ability of the leaders and activists to organize, express dissent and protest. Media outlets are under lockdown, which impacts information flow. What is happening in the valley is not entirely known, and very few voices from the region itself can be heard.

Journalists in Kashmir have faced difficulties in the past, despite which they were able to ensure the flow of information. The current clampdown on journalists has effectively shut off the region from being able to send out or receive information, which is critical in times of conflict and to counter disinformation. Journalists have reported that they are being subjected to verbal, psychological and physical intimidation.

The illegality of communications blackout

All these measures by the Indian government that restrict the freedom of expression of the Kashmiris and suppress advocacy for democratic rights are contrary to international norms, including the International Covenant on Civil and Political Rights and the Universal Declaration of Human Rights. According to the UN Human Rights Committee, which issues authoritative interpretations of the ICCPR) restrictions on the expression “may never be invoked as a justification for the muzzling of any advocacy of multiparty democracy, democratic tenets and human rights” (see Human Rights Committee general comment No. 34, para. 23).

These moves by the Indian government also go against the rights of people set out under the Indian constitution regarding freedom of expression and assembly, freedom of press and the right to life guaranteed to all persons to the end that “no one shall be deprived of his life or personal liberty except according to procedure established by law” (Article 19, Article 21 of the Constitution of India). These rights were hard-won by independent India and formulated over 70 years of being a democracy, and it is a shame that they are being dismantled by the current government in power.

As Jammu and Kashmir has long been a region of contention in the region, there are a number of Kashmiris who are now living in other parts of India and the world and are unable to get in touch with their families. The restrictions on movement and curfew have also impacted daily life in the region and reduced access to hospitals and medical treatments.

Even in the Indian territory, the mere suggestion of an open discussion at Aligarh Muslim University led to security deployment at the school, and similarly, students were warned not to protest or carry posters in Hyderabad University. The vicious targeting of the only Muslim majority state for the downgrading of status from state to union territory has also unleashed online misogynist attacks on Kashmiris and others supporting them. This is evident in statements such as the one indicating that Indian men can now marry fair Kashmiri girls.

We call on the government of India to lift all restrictions on internet access and to restore telecommunications immediately. We urge them to eradicate the practice of imposing internet shutdowns, which have the effect of isolating people, shrouding them in darkness and unduly restricting their rights to freedom of expression, information, association, and assembly, among other rights. We ask that the government refrain from restricting and impeding the work of journalists and human rights defenders, and for the voices of the people in Kashmir and the critical voices in India to be heard.  We call on the government to immediately release those who have been detained.

About the Association for Progressive Communications

APC is both an organisation, and a network of organisations. It’s mission is to to empower and support organisations, social movements and individuals in and through the use of information and communication technologies (ICTs) to build strategic communities and initiatives for the purpose of making meaningful contributions to equitable human development, social justice, participatory political processes and environmental sustainability.

About Media Matters for Democracy

MMFD is Pakistan based media development and digital rights organisation that is working to promote freedom of media, expression, and communications. MMFD is a member of the APC network in Pakistan.