What: A session discussing blogging ideology and the consequences of religious expression in South Asia

In South Asia, society is dominated by religion, where discriminatory laws are made and implemented and one religion gets priority over others. This practice greatly undermines freedom of expression, where the slightest comment on any religious account can be termed criminal and the author/speaker of such a comment can be charged and held punishable. This response comes not only from the law but also comes in the form of vigilante action by members of the public angered by perceived blasphemy. In countries like Pakistan, for example, there have been many incidents in the recent past, where groups of people or even individuals have taken lives of others on mere accusations of committing blasphemy. Article 18 of the Universal Declaration of Human Rights gives everyone the ?right to freedom of thought, conscience, and religion?. Through Article 19, we have also been given the freedom to express ourselves freely, through any medium. However, across Asia, these two freedoms combined online have created a dangerous nexus that has cost many their lives, security and freedom. Religion, especially in societies and states that have an ?official? religion tends to be a matter of extreme sensitivity.

Opinions against or in deviation with the majority religions can be dangerous. While the internet has empowered people to express and broadcast their opinions to a previously unimaginable number of people, the same ability has also exposed people with diverse and deviating ideological and religious expressions to volatile and violent reactions. From hate speech bordering on harassment to threats, attacks, and murders ? bloggers and journalists focused on the speech of a religious nature have increasingly faced persecution. This panel will explore a few key questions including; how does one regulate matters of faith and spirituality, especially those where different rights come in conflict? How much freedom of expression should there be, when it comes to speech and opinions about religions? and what have been the consequences of such speech for bloggers in countries like Bangladesh and Maldives? And what possible policy and practical solutions can be employed to make the online space safer for ideological speech? 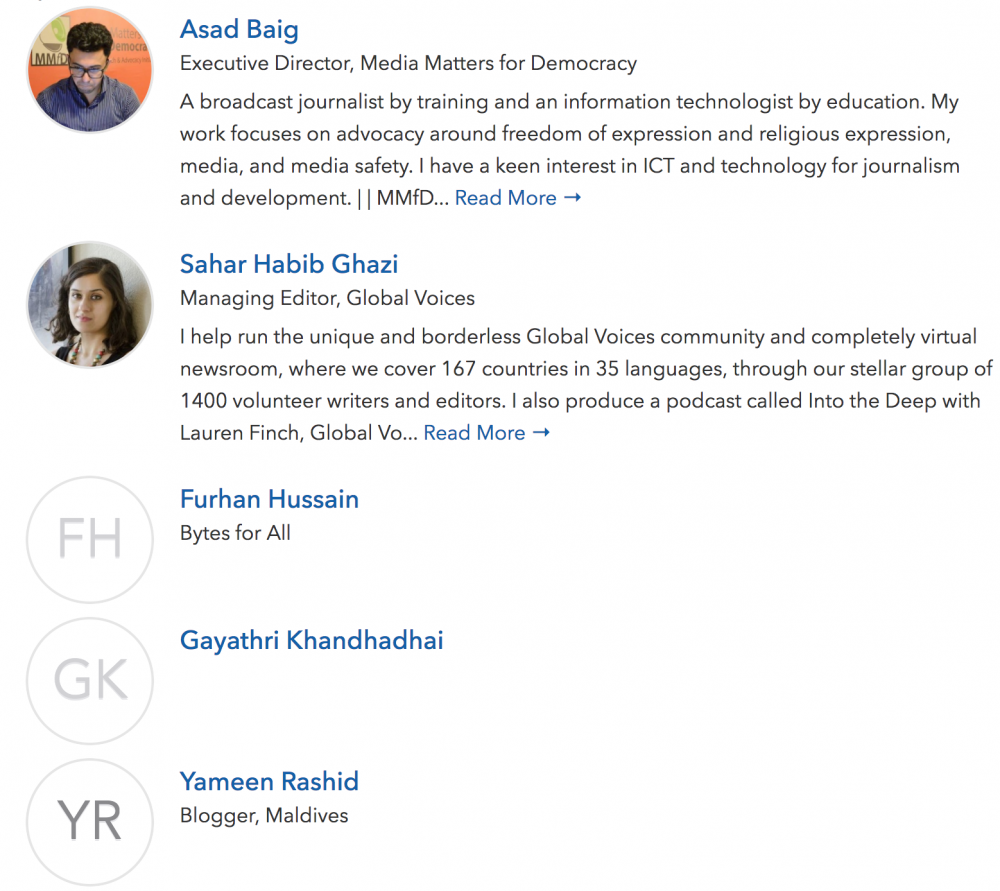 We wish to explore the link between sexist humor online and the concept of “dangerous speech”, as expounded by Susan Benesch, particularly in different contexts around the world. The moderator will start off by having a conversation regarding the emergence of online sexist humor in Pakistan – from restaurant owners defending overtly sexist marketing strategies online and Pakistani Men’s Rights Activists calling themselves “feminists” and berating women unapologetically, to a widespread display of homophobia (and misogyny) by Pakistani celebrities after the same-sex marriage verdict. We will then move on to the co-organizers discussing their experiences within their own countries and contexts. We will then discuss the idea of inflammatory speech driving people to harm one another and how sexist speech could potentially be a part of this. Later on, we will discuss solutions and limitations as to how such speech can be countered while acknowledging that what works in one context may not work in another. This will include a discussion on whether or not to engage with ‘trolls’ by using counter-speech, how to react to such ‘free speech’ we otherwise wouldn’t hear, the advantage of such speech being called out by other social media users, and more importantly, examples of such speech being effectively countered by feminists in an effort to reclaim public/online spaces.
We will then divide participants into groups and ask them to do the same exercise among themselves, and then each group will present their discussion, with examples, and the solutions that came from it.
Outcomes: It is important for us to understand how such speech can be countered and called out; we wish to discuss and devise creative solutions and also discuss limitations in countering sexist speech online. It is also important for us to discuss the importance of online movements and activities in the context of feminism, particularly how to counter the backlash they receive. We wish to engage more activists and build an international network so that we can rely on more community-driven solutions for this widespread problem. 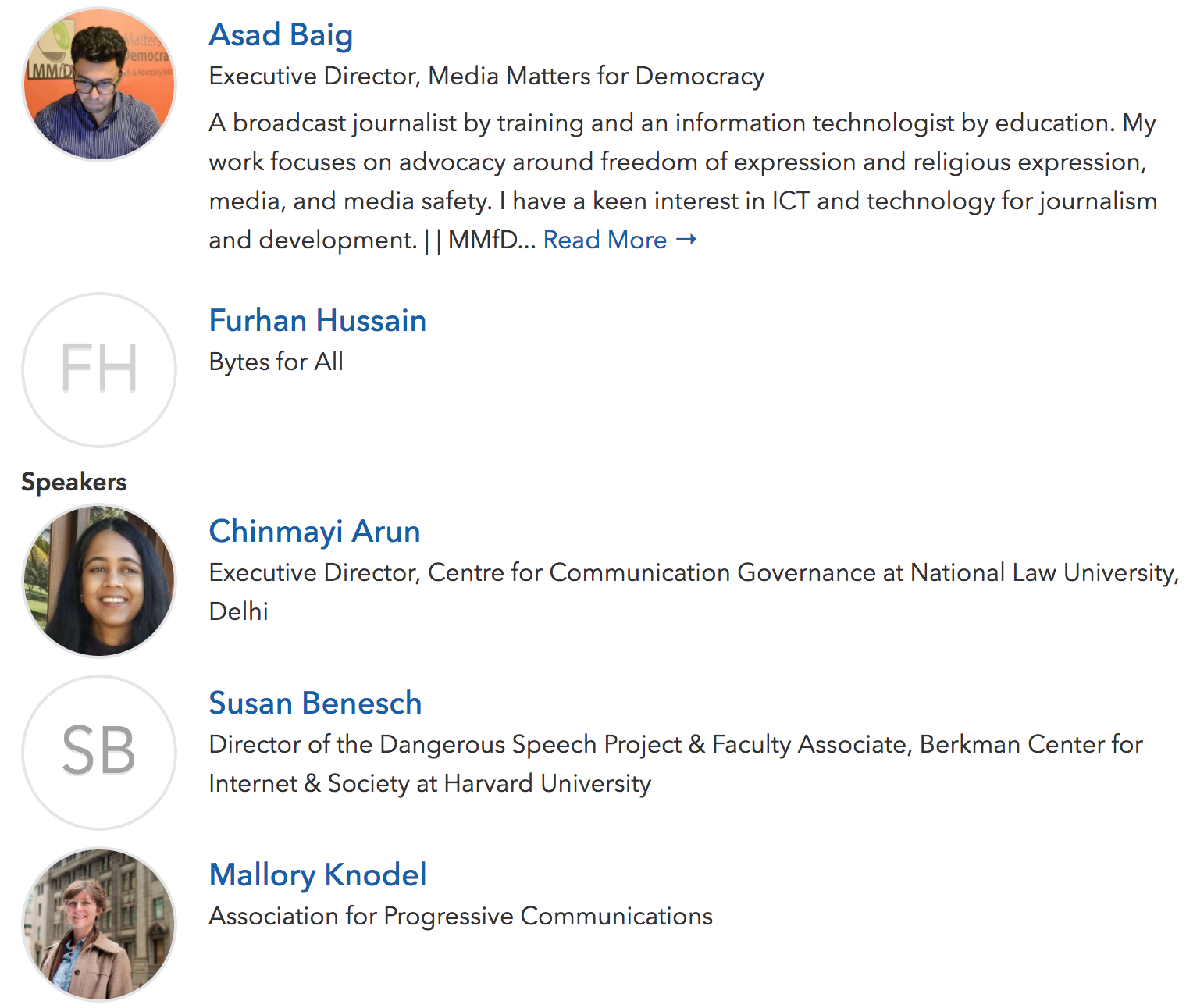 What: A session discussing the rise of big data, and retention and collection of consumer data by big corporates

New technologies had great potential for the developing world. However, the problem lies with systematic failure to critically contemplate the potential ill effects of deploying technologies in development and humanitarian initiatives and in turn to consider the legal and safeguards required in order to ensure the rights of individuals living in the developing world. Present Management Information Systems are gathering and storing extensive amounts of personal data in what are often insecure or high­risk environment for human rights defenders. Most of developing countries including India, Pakistan, Malaysia where government often used to manage information of citizens to provide developmental schemes or administer those schemes. On another hand, Facebook?s real name registration system is dictating people how to register their accounts and set­up their user profiles. The potential use of mobile phones in developing countries to collect or generate data, and the subsequent analysis of such data, has the potential to assist in the development and humanitarian initiatives in multiple ways. But in an age of widespread communications surveillance by both State and non­State actors, using mobile networks to transmit sensitive data is inherently risky. 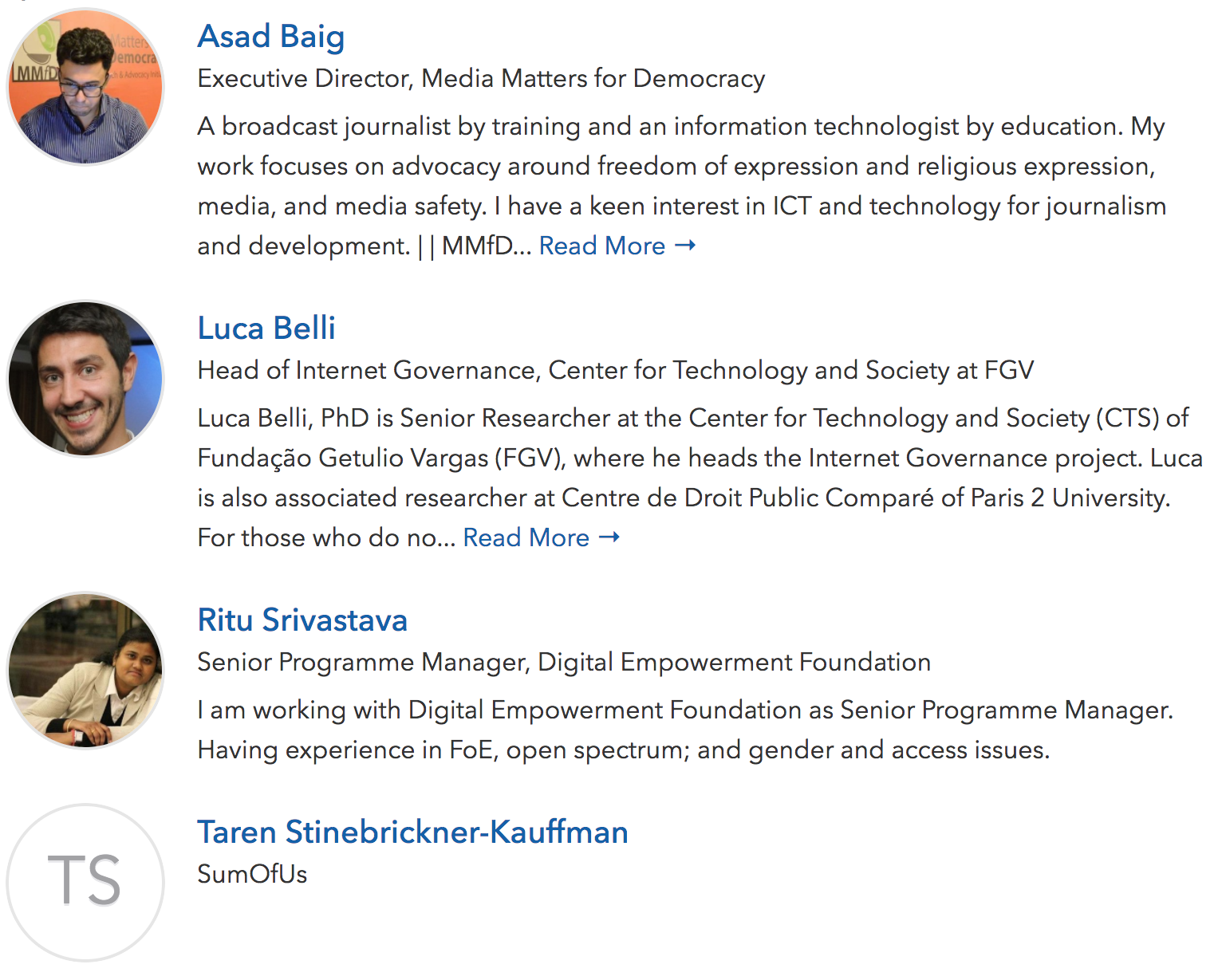 What: A design thinking workshop to brainstorm ideas for providing pro-active safety for journalists in high-risk zones

This workshop will bring together journalists and technologists to explore ideas employing technological and digital solutions to assist media workers working in high risk zones. The workshop will employ design thinking methods and participants would work in groups to explore challenges in media safety and come up with possible technological solutions. It will be a very high paced workshop, focused completely on practical designing methods and will end with ideas for creation of prototypes of digital solutions Through this, we hope to help technologists understand journalists by exploring the situation within which media workers in conflict situations operate, to introduce the concept of technology as a safety solution to journalists, and explore their ideas concerning technological solutions and finally to explore and develop nuanced ideas regarding safety of journalists that employ technology and are practical to use. The workshop has very concrete and practical purposes and it will focus on the designing of an digital safety solution, an application that assists journalists in keeping safe. The ideas that come out of this workshop or any prototypes that are developed would be used to strengthen the design of Muhafiz, an application that MMfD is currently developing to help journalists in Pakistan. We will also look into ways of translating any new and practical ideas will into prototypes to test.