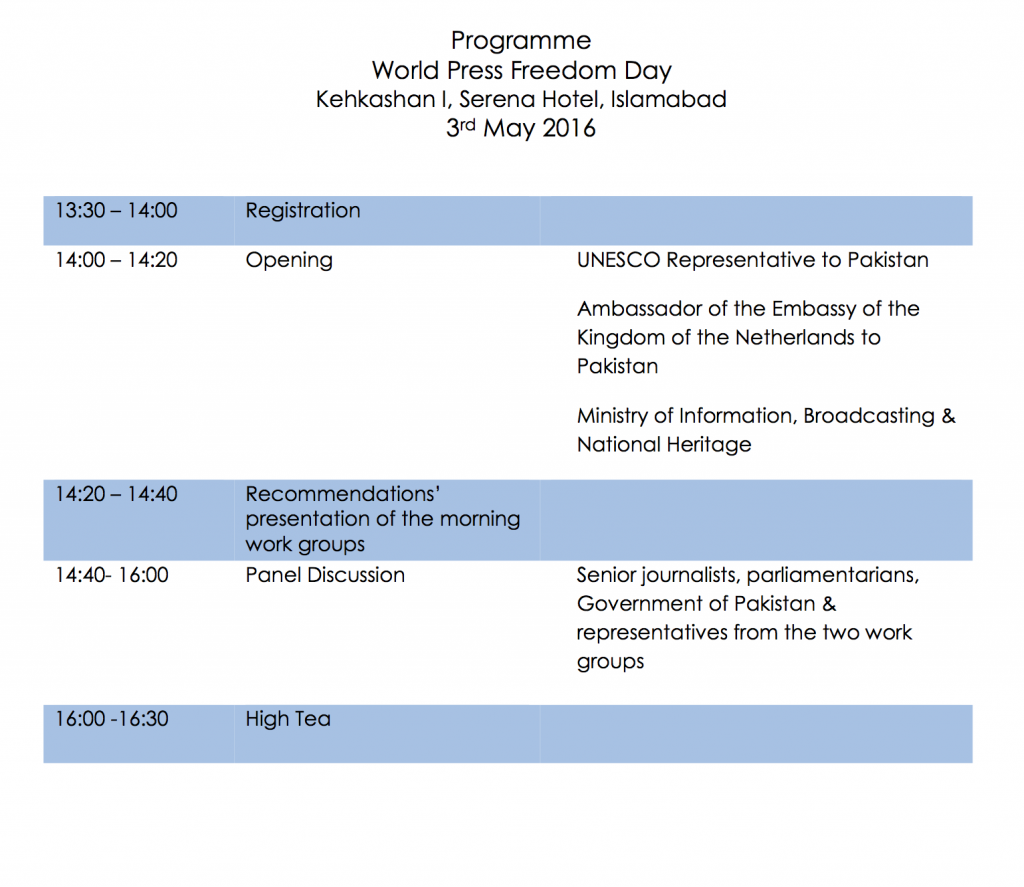 What: Commemoration of World Press Freedom Day by UNESCO and MMfD

The adoption of the Windhoek Declaration by journalists in 1991 in Namibia gave rise to the World Press Freedom Day being recognized by the United Nations. This declaration highlighted that press freedom is constituted by media freedom, pluralism and independence. Each year, the day serves as an occasion around the world for stakeholders to celebrate and strengthen this right.

This year, UNESCO Pakistan, the Embassy of the Kingdom of the Netherlands, the Media Matters for Democracy and the Center for Peace and Development Initiatives will co-host the World Press Freedom Day in Islamabad. The occasion will be an opportunity to discuss and reach recommendations on two main subjects: the Right to Access Information and the Safety of Journalists in Pakistan. The Journalists Safety Online and Offline has a direct impact on public access to information, as the aim of attacks against the journalists is not only to silence them but to exert a dampen effect on all public discussion.

This right has been enshrined as a corollary of freedom of expression in other major international instruments, including also the International Covenant on Civil and Political Rights (1966) and the American Convention on Human Rights (1969).

Furthermore, the important Sustainable Development Goals (SDGs), agreed and signed by all Member States including Pakistan in 2015, underline in the Goal 16 (Peace, Justice and Strong Institutions) the importance of the access to information in promoting peaceful and inclusive societies together with the associated target 16.10 that highlights the importance of “Ensuring public access to information and protect fundamental freedoms, in accordance with national legislation and international agreements”.

Thus, enabling freedom of information is a sign of government openness and accountability. It represents an important instrument to prevent and combat corruption and can also help increase government efficiency and responsiveness, along with civic trust.

In 2002, Pakistan promulgated the right to access to information as a fundamental constitutional right, stating: “Every citizen shall have the right to access information in all matters of public importance subject to regulations and reasonable restrictions imposed by the law”. Despite this excellent initiative, the law is subject to frequent changes and its implementation has been weak so far according to media and civil society.

“Noting that violence and other crimes against those exercising their right to freedom of expression, including journalists, other media actors and human rights defenders, have a discouraging effect on the free flow of information and ideas in society (‘censorship by killing’), and thus represent attacks not only on the victims but on freedom of expression itself, and on the right of everyone to seek and receive information and ideas”.

As this quote makes clear, when a journalist or anyone else is attacked for expressing themselves, a crime is committed not only against that journalist, but against the free flow of information and ideas in society.

The UN Plan of action on the Safety of Journalists and the Issue of Impunity, endorsed by the UN Chief Executives Board on 12th April 2012, is the main reference on this issue, as its objective is to uphold the fundamental right to freedom of expression and in so doing, to ensure that citizens are all informed and actively participate in society at large.

The Plan of Action aims at creating a free and safe environment for journalists and media workers, both in conflict and non-conflict situations, with a view to strengthening peace, democracy and development worldwide. Its measures include, among others undertaking, the establishment of a coordinated inter-agency mechanism to handle issues related to the safety of journalists as well as assisting countries to develop legislation and mechanisms favorable o freedom of expression and information, and supporting their efforts to implement existing international rules and principles.

Pakistan is considered as one of the most dangerous countries for journalists and media workers according to The Safety of Journalists and the Danger of Impunity report. Since 2006, at least 43 journalists have been killed in Pakistan confirming its status as the country with one of the highest number of journalists killed. Journalists face during their duty attacks from different actors. Journalists risk their lives when covering conflict issues (especially when lacking proper equipment and training) and they often have to practice self-censorship in order to avoid being the object of attacks. The mere presence of a journalist is near impossible in war-ravaged zones like Federally Administered Tribal Areas (FATA) and Khyber Pakhtunkhwah (KP) where not only the journalist but also their families and personal properties are targeted.

Noting this alarming situation, Pakistan was selected as one of the five pilot countries for the implementation of the UN Plan of Action, formally launched in March 2013 in Pakistan.

Objective of the World Press Freedom Day commemoration in Pakistan

The day will start with two working groups including governmental representatives, media actors, academia & civil society that will two focus on two main issues: 1) The right to information legislation in Pakistan, in particular the lessons learnt from KPK and Punjab, and 2) Safety of journalists online and offline, with a specific focus on the Journalists Protection and Welfare Draft Bill.

The recommendations from these two working groups will be discussed in the afternoon’s panel discussion by media experts and governmental representatives to identify a strategy for responding to these matters.